I have yet to write about our stay in Placencia, Belize. In short, it was a dream! We loved the low-key atmosphere, gorgeous beaches and snorkeling (we got to swim with sea turtles! And sharks! And dolphins!). Detailed post to come soon; in the meantime…

On that *fateful* bus ride down to Dangriga, Belize, we met an American named Tim who suggested we check out Livingston en route to northern Guatamela. We’re so glad we did!

Livingston, Guatemala is a sleepy fishing town southeast of Belize’s southern border. As soon as we hopped off the boat — we arrived from Belize via bus and water taxi — we were greeted by a group of friendly locals and several large iguanas, the latter of which were peering down from the trees (yipes!). After dropping our stuff at our guesthouse, we set out on foot to explore the town. 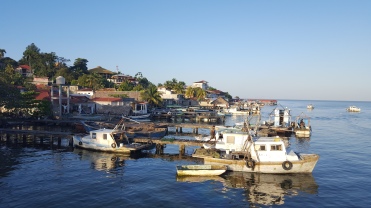 The dock, as viewed from Casa Nostra 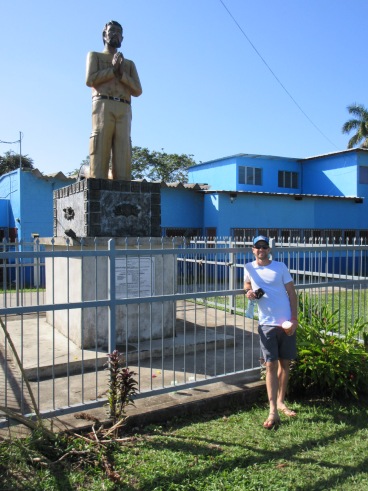 Jeff posing with a statue of Livingston’s founder

One guidebook I read mentioned that tourists either love Livingston or find it grungy and lacking in things to do. Jeff and I thought it was a very charming place; while the “gringo hustle” is alive and well in Livingston, we got the sense that it wasn’t much of a tourist trap (unlike some other spots we’ve visited thus far). A great deal of the town can be explored on foot in an hour or two, and while I probably wouldn’t stay for more than a few days, it was well worth a stopover.

Our guesthouse, Casa Nostra, was just delightful and a highlight of our brief stay in Livingston. The owner, Stuart, gave us a bunch of tips for getting around and also helped us secure tickets on the next day’s water taxi from Livingston to Rio Dulce. We had an excellent dinner at Casa Nostra’s restaurant; Jeff got the fish stew, which came with about 1 lb of seafood (including a whole bone-in fish, squid, large shrimp and a crab) for about $11 US (!)

Jeff delighted to find a whole crab in his supper

We woke up early the next day to have a quick breakfast at Casa Nostra (again, superb) before departing for Rio Dulce. One of many great things about Guatemala is the coffee; a good, strong brew is easy to procure virtually everywhere. (I thought this would be the case in Belize too, but instant Nescafe seemed to be the go-to in most places there. Having lived with my mom and Clint for about a month pre-trip, let’s just say I have become accustomed to strong coffee early and often!)

The Rio Dulce water taxi was a 2-hour journey down the Rio Dulce river to the town of Rio Dulce, where we could catch a bus to Flores. The boat itself was packed to the gills — about 16 people and their luggage were squeeeeezed on — but it was a beautiful trip. We made our way downriver through a narrow channel with lush jungle on both sides; Jeff and I were gawking in awe and disbelief the whole time. Apparently this particular trip is a bird watcher’s dream; we’re not really birders ourselves, but our moms would have appreciated it! 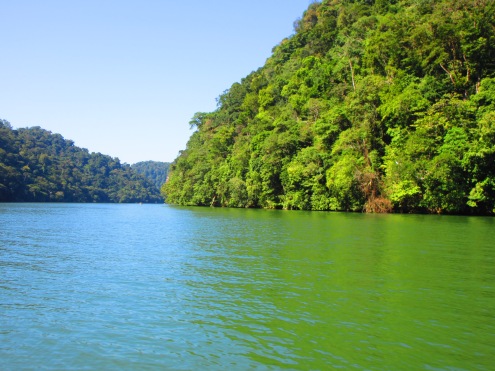 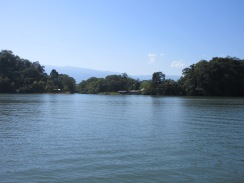 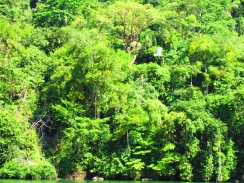 Luggage piled high in the bow of the boat,

Note: for fellow travelers journeying from Placencia to Livingston, make sure to leave early in the morning! While there are several daily water taxis from Placencia to Independence, and several daily buses from Independence to Punta Gorda, as of January 2017 there is only one water taxi from Punta Gorda to Livingston. It is run by Memo’s and departs promptlly at 1pm.