Though we only spent two weeks in Colombia, we managed to enjoy three very different climates: boiling hot Cartagena; rainy, cool weather in Bogotá (Colombia’s version of “winter”); and finally Medellín, where it feels like spring year-round!

Now that another couple of weeks have passed since we left Colombia, Jeff and I have had some time to reflect on what we’re glad we did and what we might have done differently. For example, our entire time in Colombia was spent in three major cities; though the climate diversity was great, if we could go back and do it again, we might add some smaller towns into the mix and spend less time in the metropolises.

Coulda, woulda, shoulda! While I sometimes feel like we would benefit from more advance research, it can be challenging to strike a balance between planning and over-planning, the latter of which comes at the expense of the present moment. I can’t tell you how many times we’ve inadvertently spent several hours plotting out some leg of a future journey only to realize well, great, now it’s raining and getting dark and we’ve effectively wasted a day in X planning for Y. I’m continually reminding myself of something my (very well-traveled) friend Sarah told me before we left: down time on a long trip — whether spent trip planning or writing this blog post or just vegging out on the couch — is not wasted time. We’re in it for the long haul, so some days spent doing mundane things are inevitable.

Anyway, back to Medellín! Medellín is awesome, guys. Jeff and I agreed that it was our favorite of the cities we visited in Colombia, and we got to spend a whole week there. Now that I’m in the habit of posting photos of our accommodation, I just want to issue the disclaimer that the below is NOT representative of our typical abode abroad (abode abroad…? whatever, I’m leaving it). We got super lucky with our airbnb in Medellín because we paid for a much more modest apartment, but it ended up being unavailable so we got this ridiculously nice upgrade in the lovely El Pablado neighborhood: 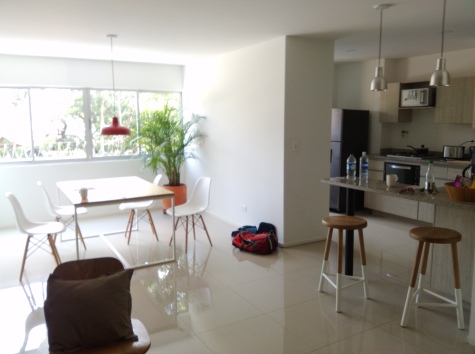 Way too much space for us, but we’ll take it!

We had great restaurants, bars, parks and shopping, all located within a stone’s throw of our apartment. El Pablado is definitely a ritzy area; it’s easy to find a great meal, but it is p-r-i-c-e-y. When it came to dining out in Medellín, Jeff and I struggled to balance our “WHEN IN ROME!” and/or “EVERY NIGHT IS DATE NIGHT!” mentalities with a healthier/more realistic “this budget needs to last 10 months” mentality. Suffice it to say that we failed miserably on this front in Medellín.

Every night is date night, right?

Another day of fine dining in Medellin

I realize this post is really dragging along, so I’ll wrap it up with a quick rundown of some highlights from Medellín. First and foremost, Jeff and I both LOVED the Fernando Botero sculptures and paintings on display in the Plaza Botero and Museo de Antioquia, respectively. Botero is a Colombian artist whose signature style features “voluptuous” figures of all types: men, women, animals, etc. There’s something about his style that is so charming (I’ve never heard Jeff giggle so much as he did while walking through the Botero galleries). 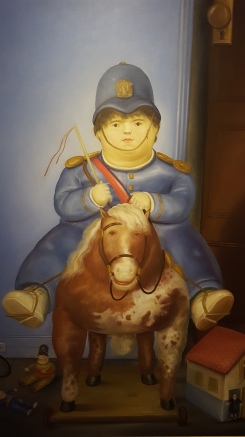 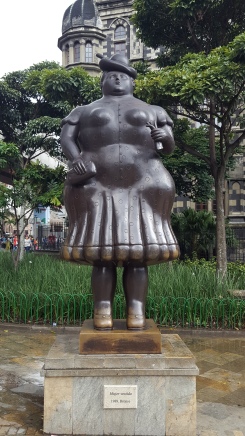 Another highlight was visiting the Jardin Botanico de Medellín: a green space in the heart of the city boasting thousands of plant species and, to my horror, reptiles the size of small children. To get to and from the botanic gardens, we tested out Medellín’s Metro system, which is still Colombia’s only rail-based metro system. The Metro itself is widely noted for its social and cultural impacts: besides serving as a bridge between poor and affluent neighborhoods, the Metro has substantially boosted both tourism and business in the city.

It was even bigger in person! 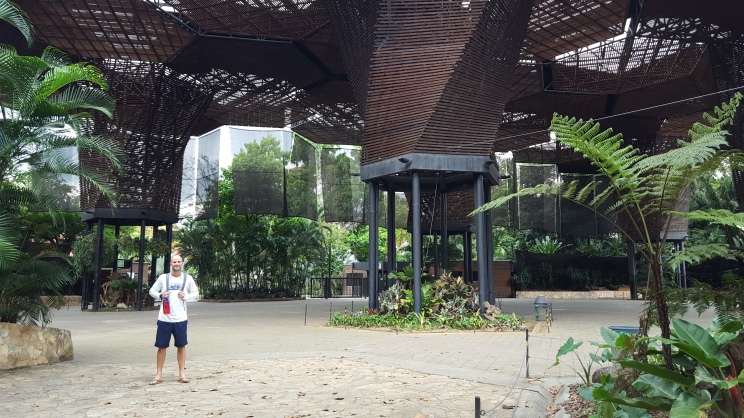 Jeff under a cool wooden structure in the botanic gardens

Each Sunday, Parque la Presidenta in El Poblado turns into a farmer’s market where one can buy fresh and cheap produce, fruit juices, pastries, and an amalgam of other treats. We enjoyed strolling around the market and picking things up for future meals (because again, we had a kitchen!). Staying for a full week in Medellín made us feel like we were actually living there, and shopping the farmer’s market — like we sometimes did in DC — really sealed the deal.

On our final full day in Medellín, we made the trek up to Parque Arvi, a nature reserve accessible via a series of metro and metro cable rides. (I should point out that my fear of heights is actually subsiding thanks to large doses of “exposure therapy” on this trip.) 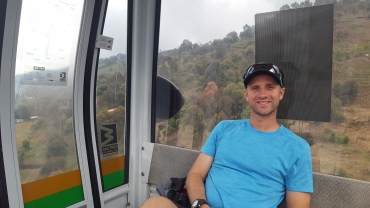 Enjoying a long (and steep) ride up to Parque Arvi 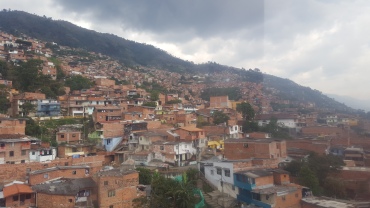 Medellin hillside neighborhood, as viewed from the cable car

We were excited to explore the park and do some light hiking, but unfortunately the trail system was very poorly marked, and probably intentionally so. We’ve noted that many nature areas in Latin America strongly push tourists to hire a guide, which is usually pretty lame as far as we’re concerned.

This is my “I don’t need no guide” hair flip

In any case, we enjoyed the jaunt outside the city and a chance to stretch our legs before what turned out to be a LONG journey to Ecuador the next day. More on that to come!