After several days spent fishing and hiking in Junin & San Martin De Los Andes, Clint, Jeff and I headed south to Bariloche, one of Patagonia’s most popular towns in the foothills of the Andes. Luckily, we visited during the “shoulder” season — Patagonia’s autumn — which is still stunningly beautiful but much less crowded than the summer and winter months.

Bariloche feels kind of like a ski town in the Swiss Alps. OK OK…I’ve never actually been to Switzerland, but Bariloche is very posh-y, its architecture is unmistakably European, and the town’s ski mountain, Catedral, is a major destination during the winter. So I’m running with the analogy!

Anyway, the town has lots of cozy bars and restaurants, great shopping (if high-end outdoor gear is your thing), and is known as Argentina’s chocolate capital. And, for reasons I don’t care to Google, Saint Bernard dogs are very popular in Bariloche; one of the first things we observed when we arrived was a Saint Bernard dog show in the town square. To recap: comfort food, chocolate, fancy retail and enormous, cuddly dogs. I’M SO THERE.

We rented a lovely Airbnb right downtown, which had a pretty amazing view of Lago Nahuel Huapi — Bariloche’s lake. And, despite my best laid plans to cook several exquisite meals in our kitchen, we wound up going out most of the time. Oopsies!

But we got to experience some great restaurants as well as some decent craft beer [the ‘decent’ rating was supplied by Clint, our resident beer connoisseur]. Cerveceria Manush was particularly good — but maybe that’s just because we were craving some American comfort food (e.g. chicken pot pie, butternut squash soup, etc.).

On our first full day in Bariloche, we headed to Cerro Campanario — a viewing spot that can be accessed via chairlift or short hike. While less popular than other nearby sites like Cerro Otto and Cerro Catedral, we’re pretty certain the view couldn’t get any better. I even confessed that the scenery was a touch more beautiful than my favorite place in the world — Huron Mountain in Michigan — which is a HUGE concession for me. But if anyone asks, I never said that.

After we were sufficiently stunned, we made our way down Cerro Campanario and hopped in the car to check out the famed Llao Llao Hotel (loosely pronounced jow-jow). It’s one of the fancier establishments I’ve ever had the privilege of exploring; imagine merging a hunting and fishing club with St. Regis-caliber luxury in an epic mountain/lake setting, and you start to get the picture. Clint treated us to lunch in Llao Llao’s Cafe Patagonia — which was excellent — and we all left feeling very regal. 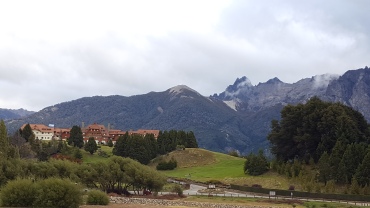 Hotel Llao Llao, as seen from the road (felt too cheeky taking photos inside!) 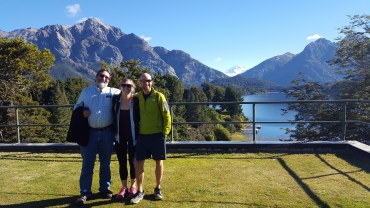 Snuck this pic outside Llao Llao

On our second full day in Bariloche, we bought tickets for a boat tour of Lago Nahuel Huapi via Cau Cau Tours. Since our Llao Llao experience had us feeling extravagant, we decided to spring for space in the boat’s VIP section, mainly for the better seats and free libations. Plus, the up-charge wasn’t too drastic.

The boat trip was a great opportunity to see Bariloche and the surrounding areas from a different perspective (i.e. from the the water). Over the course of the 4ish hour trip, we had stopovers to explore both Isla Victoria and Parque de los Arrayanes, and were treated to stunning views from the water both ways. We also watched — with equal parts horror and disgust — as some of our fellow passengers fed savage seagulls from the deck of the boat. So gross. 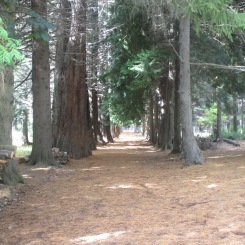 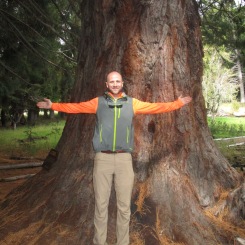 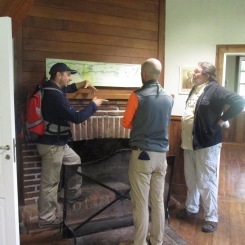 Our friendly english-speaking guide, Sebastien, giving us a tour of a farmhouse on Isla Victoria

As evidenced in the photos above, we had a great time tramping around Isla Victoria. We felt kind of “meh” about Parque de los Arrayanes, which was a beautiful area but amounted to a rather slow slog through nature with a massive swarm of tourists. (I like my nature sans designer jeans and selfie sticks, thankyouverymuch.) Crowds aside, we thought the Cau Cau was a lovely and worthwhile experience.

Unfortunately, our wonderful time with Clint (see Patagonia Pt. 1!) came to a close on our third day in Bariloche, as he returned to his obligations (e.g. my mom) stateside. Jeff and I stayed on in Bariloche for another couple of nights before continuing on to El Calafate to meet up with our friend Katie.

On our final day in Bariloche, we rented bicycles and toured the system of lakes just north of town. Though quite hilly, the views were well worth the cardio! 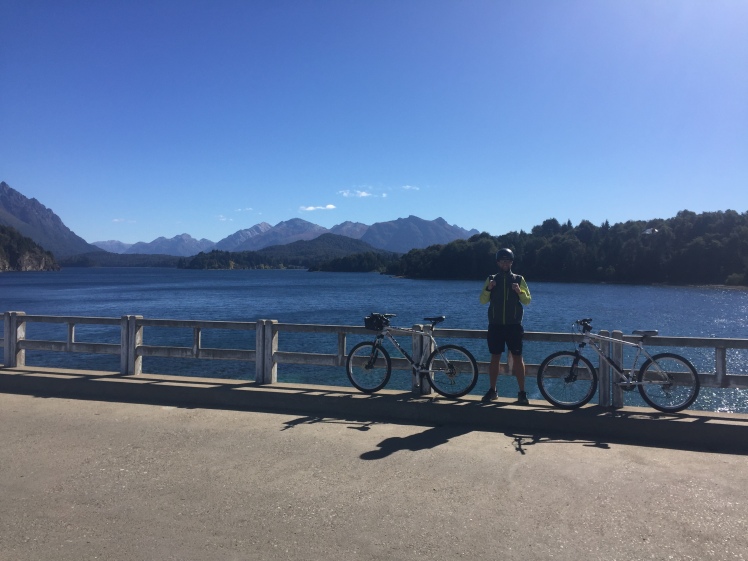 We returned from our cycling adventure in time to get organized and sleep before the next day’s very long (27 hour) bus ride down to El Calafate. More to come soon!

One thought on “Patagonia Pt. 2: Bariloche”