Having spent five days inland, Jeff and I were anxious to get out to Croatia’s world-renowned islands. We considered cutting out Zadar — a coastal town in central Dalmatia — from our itinerary altogether, but we’re so glad we didn’t!

As the oldest continuously inhabited Croatian city, Zadar has a rich and very tumultuous history. Its strategic position on Croatia’s coast meant that for centuries, it was a near-constant battleground for Croatia’s many former rulers, including Romans, Turks and Italians.

After dropping our bags at our delightful little hotel in the Old City, Palazzo Venezia, Jeff and I wandered through the winding streets surrounding the city center. Most of the streets in the Old City are closed to traffic, so it’s easy and fun to explore on foot. Zadar is pretty touristy, but outside of the busy town squares it’s easy to imagine how the city might have looked 100 or even 1,000 years ago.

Because we were only in town for a night, we decided to do the Zadar Walking Tour for a quick rundown of the city’s history and contemporary culture. This was definitely a good move: it was fascinating to learn all about the city’s original construction (and many subsequent reconstructions), including its Roman-era forum and “Five Wells Square,” the latter of which provided Zadar with drinking water in the 16th century (and fortified the city when it was under any number of sieges). Our tour guide was kind enough to extend our scheduled 90-minute tour to almost three hours, which was lovely though my feet hurt. 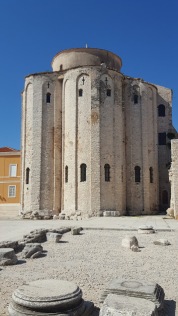 Next day, Jeff and I went on a jog on the perimeter of Zadar, which overlooks the sea. We checked out the Sea Organ, a contemporary art project that harnesses the energy of the sea’s waves to create “music” via tubes under a series of marble steps. I realize that’s probably hard to imagine as described, so here’s a YouTube video that demonstrates the experience. Jeff thought it was hokey; I thought it was pretty cool.

Next to the Sea Organ is the Greeting to the Sun, another contemporary art installation. It consists of large glass plates installed into the ground in a circular formation which collect energy from the sun during the day. At night, the glass lights up in many different colors and people hang out on it. I wish we had seen it at dusk the former evening, but we were tied up with our walking tour. Next time…

One thought on “Zadar, Croatia”

#truth #milkwasabadchoice
The comparatively more subtle Generalife Palace and surrounding gardens at #alhambra yesterday. #granada #spain
Touring the old royal palace in #sevilla today. It still serves as the Royal Spanish Family's home in Sevilla to this day. Amazing Arab architecture.
🐑 #Scotland
Scotland: it's beautiful, it's blustery, and "Weatherman Jerry" made his debut to an audience of three. Still laugh-crying 😂
Oh, this ol' palace? #Scotland
%d bloggers like this: