When we sprung for the “express” bus from Rio Dulce to Flores, we hoped for a quicker ride and mayyybe A/C. We were pretty surprised that paying a premium for a seat does not, in fact, guarantee you a seat: the bus was so packed that Jeff and I wound up standing for the first half of the 4-hour journey before two seats became vacant. We were among the lucky ones, though: many of the people we boarded with were forced to stand in the aisle (clutching the overhead storage rails for dear life) for the entirety of the trip.

Transportation snafu aside, Guatemala’s northern region (Petén) is s-t-u-n-n-i-n-g. Flores is an island town on Lago Petén Itzá with picturesque views of the lake and colorful hillside dwellings. 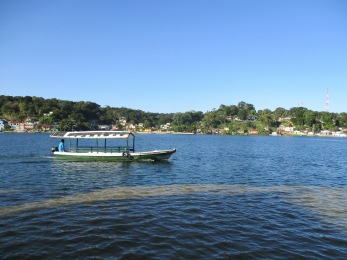 A bar/restaurant in full bloom

We stopped in Flores for a beer and a stroll before making our way to El Remate (also located on the lake). We heard a tip that La Casa de Don David was THE place to stay if we had plans to visit Tikal National Park, and it did not disappoint!

For $60 US per night, Jeff and I had a lovely private room and free meal at the hotel’s restaurant. We particularly enjoyed patronizing the “Toucan Express,” a zipline system that delivered drinks from the restaurant to a gazebo overlooking the lake. (Later that night, Jeff came to gaze at the stars and was startled to realize that a wild horse was sharing the quiet moment with him.)

My friend Alisa wrote a detailed (and hilarious) email with Guatemala travel tips, all of which have been super useful; we’ve pretty much followed her itinerary to the word. I might as well paste her description of Tikal here because it’s beautifully succinct:

“It’s where all the Mayan temples are and is the dopest place on the planet, it’s like Machu Picchu but without all the tourists and you can actually walk on all the ruins and you’re in the middle of the rainforest…Whatever you do, don’t get suckered into staying at the hotel in the park, I heard it’s mad expensive and meh.”

Jeff and I wound up booking transportation and a guide via an outfit in Flores, which was probably a mistake; we’ve since learned that booking activities through a hotel/lodging is usually a more reliable route, and often cheaper. We chose the 5-hour sunset tour based on Alisa’s rec to skip the sunrise tour (“There’s a lot of talk about doing the sunrise tours at 4am but there are only 16 days a year that there’s enough visibility to actually see the sunrise well, so don’t feel any pressure”). So, in a nutshell: Tikal is dope, avoid the hotel, and skip the sunrise tour.

As I mentioned, the experience itself was almost exactly as Alisa described. Tikal is stunning and its rich history — the city’s ascension to power, subsequent fall, re-ascension, etc. — is fascinating. Equally interesting was seeing the restoration of the various structures in progress; only about 10-15% of the massive city has been unearthed. It was cool to imagine 100,000+ inhabitants milling around the (now ancient) structures. 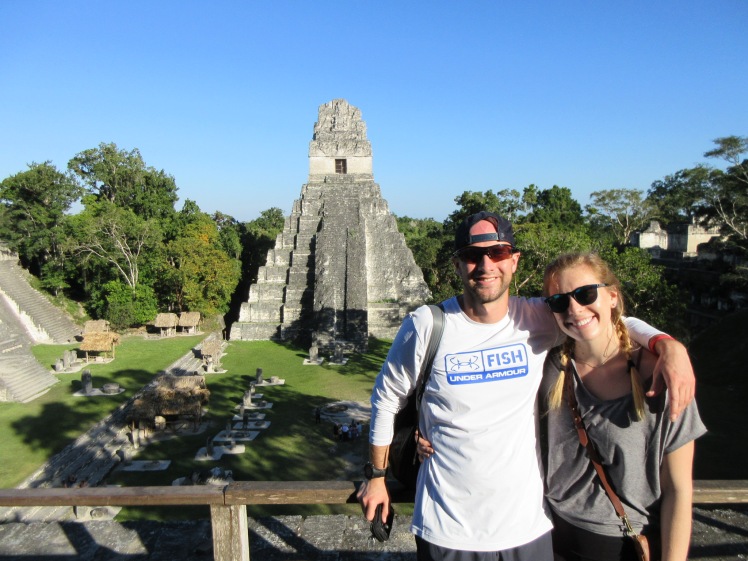 Watching the sun go down over the park and ruins was spectacular, and a highlight of the tour: